John Beerman is a landscape painter and North Carolina native and current Hillsborough resident whose work has been exhibited nationally and internationally. John received his degree from Rhode Island School of Design, and he attended the Skowhegan School of Painting and Sculpture. His 35-year career has garnered recognition at the highest levels of fine art. He has received several awards and fellowships including the Pollack-Krasner Foundation Award and the Yaddo Artist Colony Fellowship. His work is in the collection of numerous museums across the country, including the Metropolitan Museum of Art, New York; the Whitney Museum of American Art, New York; the Museum of Fine Arts, Houston and in the North Carolina Museum of Art, Raleigh. Among other public collections, his work is at the Duke University Cancer Center, the Duke Endowment and the North Carolina Governor’s mansion. He also has completed several public commissioned works including an 85-foot mural for the Milstein Family Heart Center at New York Presbyterian Hospital in New York City and recently a painting for the UNC-REX Hospital in Raleigh. 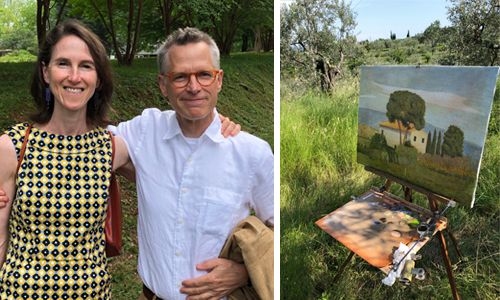